Linear Throttle is the name under which are grouped the new linear throttle family that Realsimulator has released. All they are made up of a common item, the linear base (RS-35-LTB) that is customized with the grip of chosen aircraft. Two grip models are already available: the F-35 grip (RS-35-TG) and the F-16 grip (RS-16-TG).

The Linear Throttle products family (base and different grips) are manufactured exclusively for home users and they will be manufactured in small batches to offer them by a reasonable price.

Below, under the “Description” tab, you will find a detailed product description that, as you will be able to check, makes this product unique in the market.

Linear Throttle is the name under which are grouped the new linear throttle family that Realsimulator has released. All they are made up of a common item, the linear base (RS-35-LTB) that is customized with the grip of chosen aircraft. Two grip models are already available: the F-35 grip (RS-35-TG) and the F-16 grip (RS-16-TG).

As all Realsimulator products, it comes in two lines, professional and home.

Professional version uses its own software, military switches and sensors, and customs sockets and connectors under client specifications.

Home version is designed to be used only in home environment and is not meant for professional or commercial usage.

Below we will inform you about the more important product characteristics. We are sure that when you finish reading it, you will agree with us that it is the best throttle on the market.

The RS-35-LTB (Linear Throttle Base) has a travel of 9” which gives to the user a finer engine control and therefore, simplified control of the aircraft during demanding phases of flight such as air to air refueling, formation flying and approach and landing.

The base box is manufactured in a CNC machining center on solid aluminum blocks to guarantee the dimensions, flatness and the necessary precision for a linear guide system in addition to offering a wonderful aesthetic appearance.

In order to take advantage of the 9 inches distance, we have included 5 stainless steel detent positions which can be mechanically removed or reinserted without the need to open the throttle casing because they are accessible from the bottom side. These stops have been designed to last through the life of the throttle but in the event they become damaged can also be easily replaced.

The prominence of the detents can be easily adjusted to allow our users to set the throttle up for the type of aircraft you enjoy flying. The detents are located in the following positions:

The main motion sensor is a high linearity wound industrial potentiometer similar to those used in professional throttles used by the USAF.  In case of premature failure it is easy to replace by the user and being a standard industrial product, supply of replacement parts is also assured. 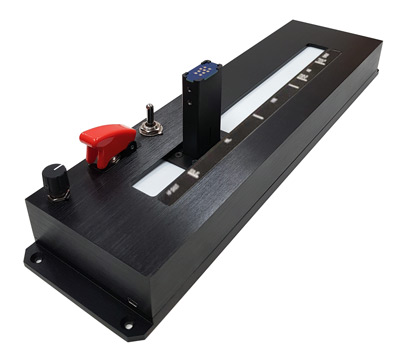 The smoothness of movement is guaranteed by the use of linear guides and recirculating ball skids, such as those used in machine tools. To protect the groove and transmit the movement to the sensor, a synchronous band with a steel core is used. It features a steel element that acts as an intermediate anchor between the movement base and the grip, which in turn includes the grip tie-down points and the electrical connection with it.

All the internal electrical connections from the grip flow through a guide channel to guarantee the durability of the cabling. The motherboard has two USB connectors, one at each end of the box, to allow its use with both front and rear connection. Only one of them should be used: the one that best suits the needs of the installation. This connection will be used to upgrade the base or grip in case of installing new firmware.

Finally in the top side of the box we can find a potentiometer with central detent and push-button, a two-position switch with guard for generic use and a three-position switch for engine idle/shutoff/asymmetry control or generic use, which can be configured independently in each of the 8 profile slots available to RS stick grip owners via the rotary under the trim hat switch.

The connection between base and grip is made through a metal adapter that is fixed to the base by screws to ensure the rigidity of the whole and inside it houses a custom pogo pin connector. 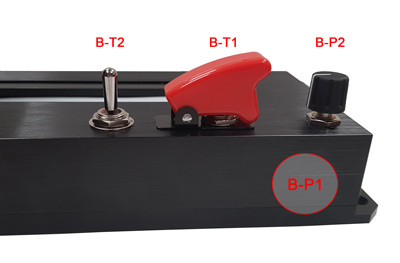 In summary, the RS-35-LTB switches and sensors map is the next:

RS-35-LTB a throttle base for different aircrafts

From the first moment in which we started to design this throttle, we have had as our main objective to make a quality and durable product; obviously, a product like this would be wasted if it could only be used for a specific aircraft. That is why we have built a modular system that allows an easy grip exchange and that will allow the connection of different grip models.

Currently there are two grips available: the F-35 grip (RS-35-TG) and the F-16 grip (RS-16-TG), although the first one has not yet started to be manufactured.

The RS-16-TG (Throttle Grip) is a kit for the RS-35-LTB to emulate the popular F-16 throttle. It includes a F-16 throttle grip replica, the guide rail and the Chaff/Flares Slap Switch.

Although the grip is mounted on a linear base unlike the real one, both the total travel and the different zones delimited in the rail guide have an effective travel similar to the real one.

The grip is fully manufactured in high density resin and it is solidly attached to a metal assembly that has the adapter for fixing to the base and allows the grip rotation to release the guide rail detents. It also incorporates the cutoff release trigger for the idle to cutoff operation.

Backed by the great acceptance that the 5-position switches have had in the F-16 and F-18 grips, unlike the real we have replaced all the grip buttons with the 5-position ones, to obtain a more functional version for the flight simmers.

The guide rail is manufactured in stainless steel and it is fixed to the base by 5 screws to ensure its rigidity. In the upper part it has the Chaff/Flares switch, which is electrically connected to a pogo pin connector that allows its connection to the base.

The RS-16-TG switches and sensors map is the next:

The RS-35-TG (Throttle Grip) is a replica of F-35 throttle grip, it is fully manufactured in high density resin, except the plate base and the base fixation that are steel.

The grip, like the original, has a super ergonomic design with a relaxed wrist position and an easy grip by protrusion to hold between index and thumb.

Although the F-35 throttle grip improves a lot of grips of other fighters and includes all the F-16 functionalities, in our idea of offering the maximum of resources and features to the user, we have taken the liberty of making some modifications over the original version to obtain a more functional version for the flight simmers.

Backed by the great acceptance that the 5-position switches have had in the F-16 and F-18 grips, we have replaced all the grip buttons with the 5-position ones and we have also replaced the AB Detent button with a potentiometer with central detent and push button.

With these modifications, the RS -35-TG switches and sensors map is the next:

Control for simple or double engine

Yes, it is not a mistake, although there is only one physical throttle sensor, we have included in the firmware functionality and control of a second analog motor axis. Its operation can be twin to the main one or balanced symmetrical or asymmetric, allowing us to do the same as with a double axis control. 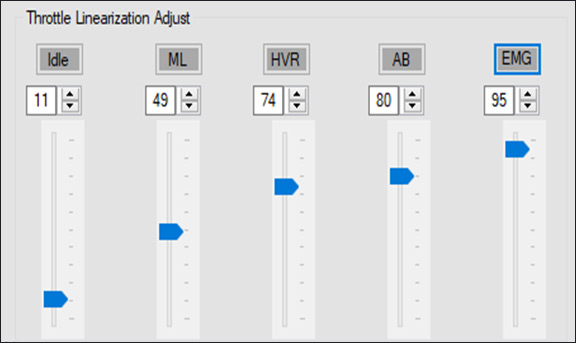 Likewise, we have included a linearity control of the throttle through 5 points in which we can select the output signal of the throttle for each of those points, so we can establish response profiles adapted to different aircrafts or different situations, such as it can be for example a refueling, take off, landing, etc.

5 DX buttons have also been associated with physical throttle positions. This enables the possibility of executing actions in the simulator when those positions are reached through the generation of keystrokes.

There are 9 additional analog axes that can be slaved to any of the physical analog axes allowing you to have several axes with the same signal.

The system includes a configurable digital mouse and a keyboard for keystrokes generation with macros.

As in the FSSB-R3L, the user can identify each slot with a name, which will be reproduced each time the slot is changed, allowing us, for example, in the case of using VR glasses, to know the active slot.

Like the rest of the devices manufactured by Realsimulator, base and grip are configurable through the RS_HID_DEV_TOOL program and can be updated with new firmware through the DCC program.

About the analog section, the RS_HID_DEV_TOOL allows the calibration of all the analog axes and the dead zones adjustment of cursor X and Y axes.

About the digital section, as we have told above the system allows configure up to 8 slots if you have a Realsimulator grip, configure the digital mouse and the keyboard for keystrokes generation by assigning them to the DX buttons.

Here you have some screenshots where you can see all the features include in the RS_HID_DEV_TOOL and DCC. 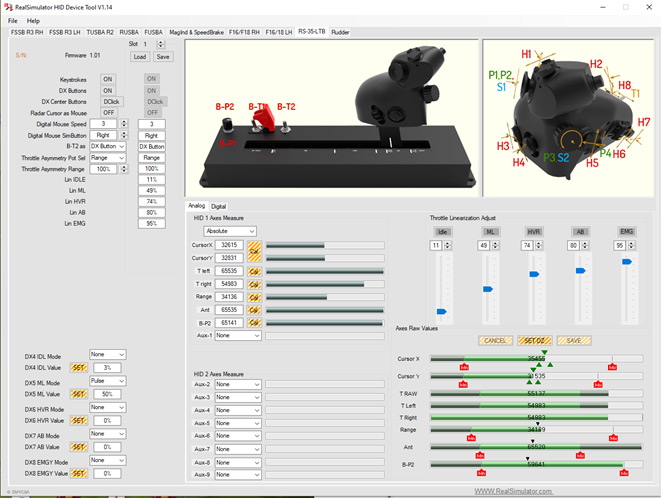 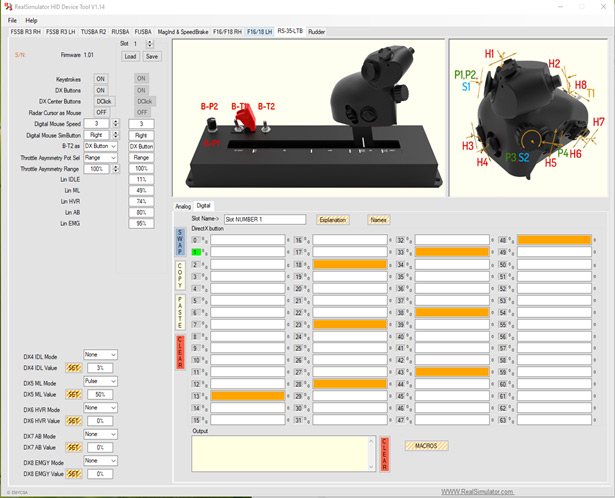 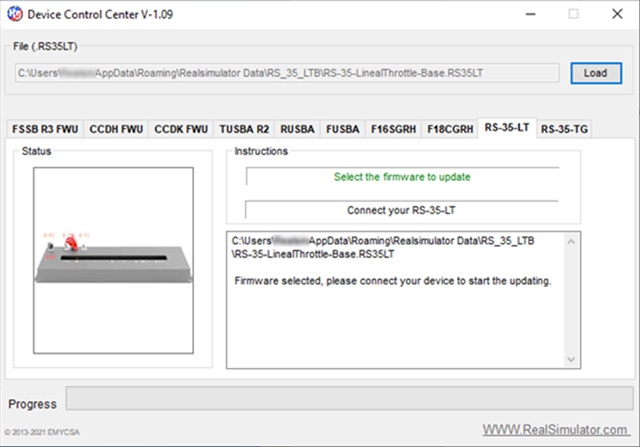 Last September 17th, 2021, the well-known streamer LowBlow made in live a review of RS-F35 Throttle (base and grip) through his streaming channel LowBlowTTV. Click on the image to watch the review. 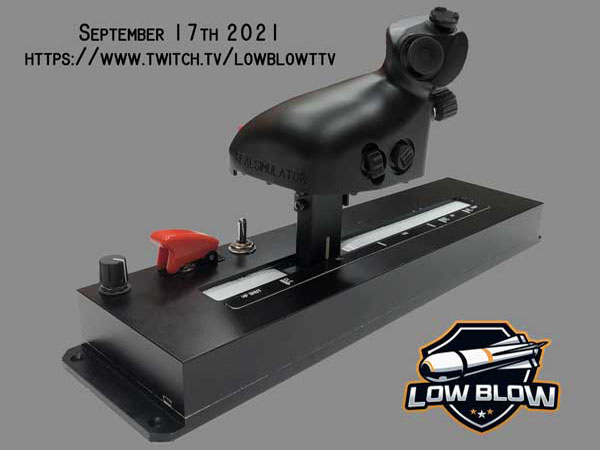 First Impressions: Realsimulator’s RS-F35 throttleThe RS-F35 throttle is a replica of the F-35 throttle from Realsimulator, and I’m quite lucky and honored to be able to check out the pre-release version recently.  So I want to give some early impressions after having used it for the past few days, for people who might be interested.

The throttle is not a true 1:1 replica but slightly modified to accommodate home users, especially VR users who may want to bind extra buttons that are difficult to reach in VR, so it actually has much more functionality than the real thing.  The throttle base is meant to be the counterpart of the FSSB R3L joystick base, which means that it will accept multiple different grips in the future.  So this is a long-lasting device by design that will be able to pair with future grips from the company.